“This translation is  a dedication to Jordan”

Winter came . Besides the cold weather and the wind the snow has come.However we went fishing.You can not sit at home and think that the steelhead swim in rivers increasingly more.I think we got a nice weather considering that last week the wind blew at 30-40 miles.

The river was quite clear and slightly lower than last time.However, water frozen in the rings pretty quickly and the streamer turned into an colorful icicle in less than a minute.We had to use a good equipement ( thick fleece underwear, windstopper hat and neoprene gloves) otherwise you might just not last a full day. But Canadians have a saying: ” Crazy weather , big fish, good friends. Sametimes it hurts, but I love it” 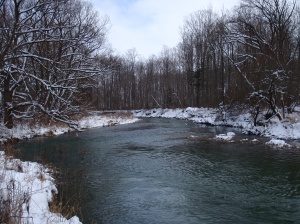 I fished the river in the same area  last time.I now insisted more on each site.We were four fishermen: me, Jordan, Brent and Josh…so we split into teams of two.Me together with Jordan went up the river.We have left to the others about 500 meter of river untouched.We entered the water.I fished with nymphs one side of the river and Jordan fished with streamers the other side of the river. After we changed several flies we went further up the river.I had the first attack on a large and deep eddy. It was very strong but I missed.Jordan had an attack too but he failed to sting. He was fishing with a black wooly bugger with orange ball on a hook rod 6 with 3  long. 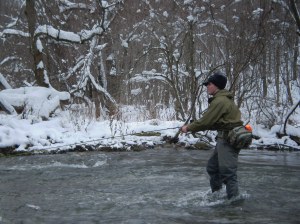 I kept on fishing and in five minutes I had a new attack.I sting and there it was…I felt it straining..it was swiming down the stream as they usually do..I let it go…It was taking fishing line..then it came out of the water and shook its head nervously…it felt with powerful sound and my fishing line broke….that was it…it was gone…the fishing line was 0.16 mm thick. It shouldn’t break but it was obviously too thick for this  fish. ” I have the satisfaction that I saw it” I said to Jordan…we laughed both and we left further . I changed the tippet with another one. This time I put 0.18 mm.I had to be sure that it won’t break again.I put on a black stonefly hook 8 with two balls in a tungsten 0.3 mm. At the end of the fishing line I put a little orange and yellow eggfly hook right type of rod 12.We arrived at another eddy.It was deeper.It had about 2 m depth.We applied the same strategy. He was fishing upstream downstream with streamer. I was fishing from the side in cehesc downstream classic style with nymph. As I was fishing I got immersed in water up to waist.Half a meter under the water in front of me was a black silhouette, about half a meter ….it swam lazily without truly care abuot me.I cried ” What a hell?” and I was immediatly out of water . “Calm down! It’s just a muskrat…We don’t have aligators here” said Jordan laughingat me.The muskrat went quietly and above 10 m it come to the surface.I can tell you that it’s not nice at all to see such an animal passing by you, although they are so cute at first sight.When swimming under water looks quite fierce. Because there was no movement we followed the stream upwords..Instead of nymph I put on a streamer .After 15 minutes of fishing in a place with only half a meter water I had a strong attack…It was pulling the fishing line out of my hands. I stung and the reel begun to make noise. The reel wire ran…It was a strong fish. I expected him to jump out of water but it did not…instead it took the hill with speed…after a while I managed to stop it. It counters me…I’m not impressed. It changed  immediately its strategy and it started coming to me quickly.It was climbing the river like a undermine. .I was collecting desperately the fishing line to keep the line streched hand…It changed direction towards the opposite bank..I was finally able to see him…That was it..it could not make it any more. It raised to the surface . I pulled him to shore and Jordan helped me as he always does. He caught the fish tail gently but firmly.The first fish we caught that day was pulled ashore. 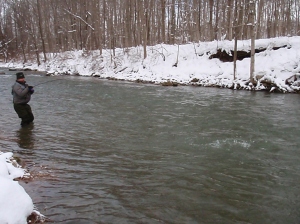 We took some photos and we released it quickly.We moved forward but now we were fishing more enthusiastic. We found a place with deep water. The water was quite fast.There was a large tree felt across the river .We begun to fish and we covered carefully every half a meter of water. The weather conditions worsen, the wind was blowing stronger,more snow was falling. We kept on trying.I had an attack again. A fish decided to bite and the denim started.This time my partner was more agile…it had a better rhythm.It crossed the river zig zag several times…it was struggling  nervously…It jumped out of the water twice …it could not excape..it bite the hook well. In several minutes ( which always pass yery quickly) I managed to remove a fish from shore. . It was smaller than the first one, but it fought as well as the first. It deserves  its  name :steelhead.

We took a few photos and then we released it. We shook the snow and kept on fishing. The weather conditions worsen.The wind was not joking with us .The fishing lines frozen faster. The rings were full of ice all the time. It was no use cleaning them.During recovery of the wire rod the forefinger gatherded ice..It was becaming harder to fish , but we kept on fishing.I said to Jordon “I have the impression we have to stop because we might not find our car”.He agreed and we disasembled the fishing poles. I won’t tell you anything about the way back through snow knee. But I can tell you that we were able to find our car.This is the winter steelheading and I can tell you that I like it a lot 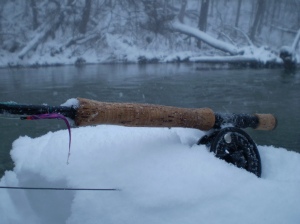 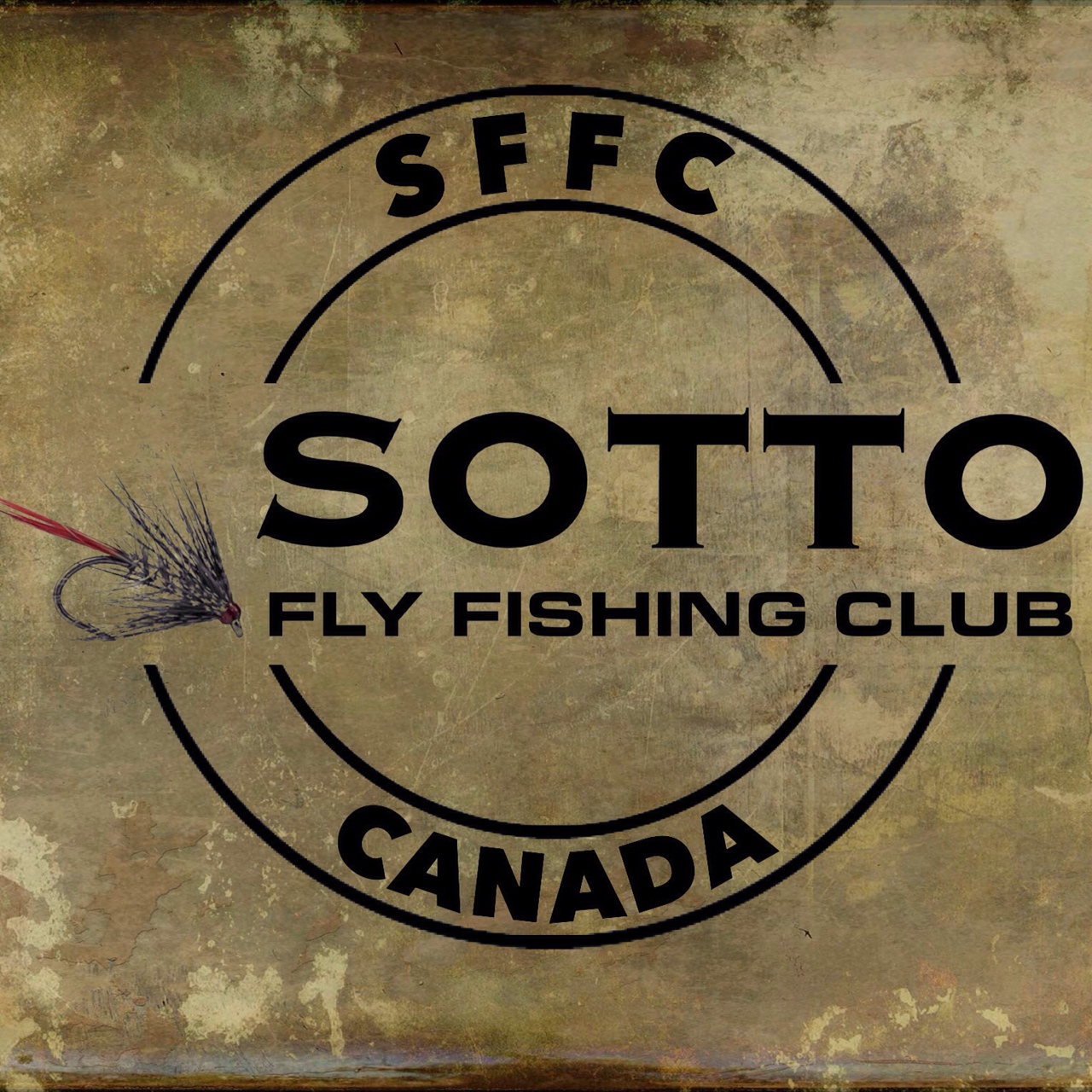